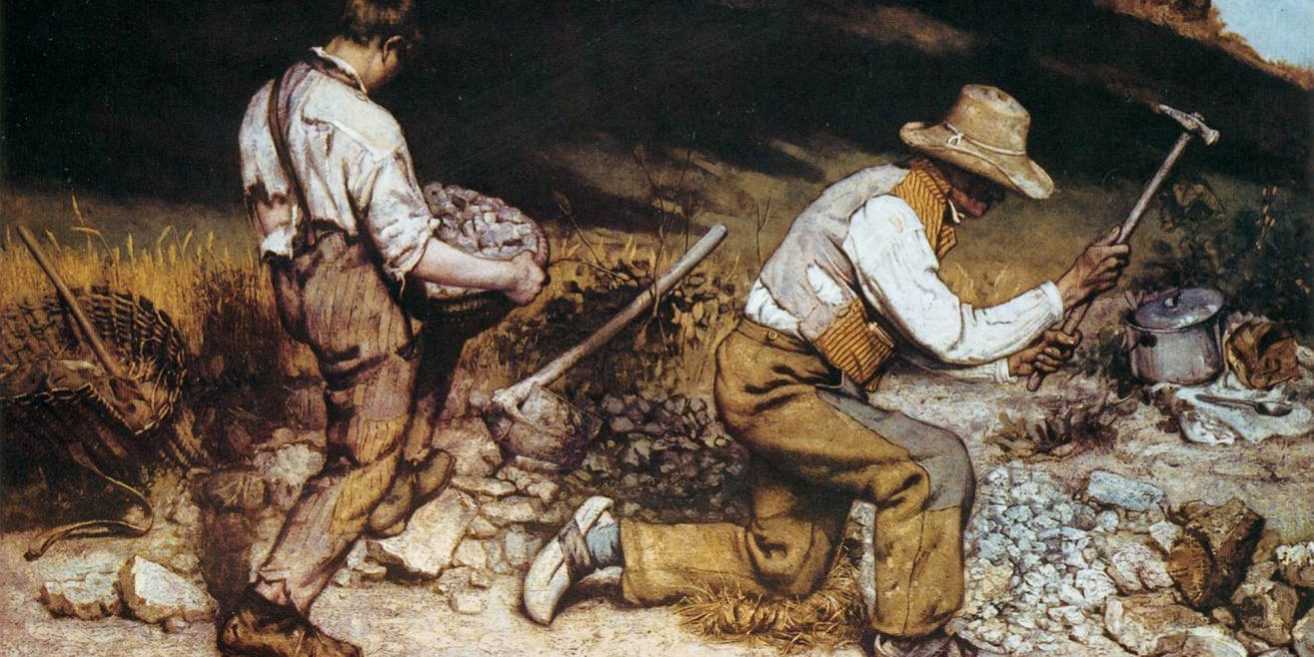 Many people would think that rock crushing would be a dull subject to paint, but Courbet’s The Stonebreakers of 1849 is regarded as a masterpiece. It depicts an old man and a boy crushing rocks by hand. The painting shows the hard reality of the poor and was a critique of how society treated the less fortunate. Crushing rock has changed from crushing stones by hand to using large equipment to build gigantic buildings.

When looking at The Stonebreakers, there is a hyperrealism that is seen in the impressive use of details: the ripped clothes, the gnarled hands of the older man holding the hammer, and the grey stones that cover the bottom of the painting. This labor looks grueling and dull, which is what the artist was trying to convey. This painting was revolutionary because it was a painting that showed everyday life for people other than the wealthy.  Paintings usually showed biblical stories or were commissioned by the rich, but Courbet wanted to make a political statement.

The composition of the painting is different from fine art because it doesn’t follow traditional rules. This is what gives it a more realistic feeling because life doesn’t follow the traditional rules of art either. Using thick brush strokes to create the people indicate movement and give them a less refined quality, the same way that a blurry picture shows the person was moving when it was taken. The dull colors of yellow, brown, and grey make the painting seem more toned down, implying it isn’t trying to draw attention to itself but rather it is in the background. This could suggest how people who are on the edges of society are usually in the background and forgotten about.

While many people think that a painting and a rock crushing company do not have a lot to do with each other, there is something that can be said about the way that life imitates art. The Stonebreakers shows how far technology and society have come,  and how we can use large, efficient machines to improve construction and the jobs in society. Crushing, moving, stacking, and carving stones has been a part of human nature since the beginning of time, and thanks to technology we can do it more efficiently than ever.